In Traits ・ By StudioMaz
1 Favorite ・ 0 Comments

All blue traits are normal traits available to myo!
Red BG require mythical upgrades (C require a common myth,  UC requires uncommon myth upgrade) if you're not sure which rarity a trait is, or how exactly it works please ask!

Leech monster bodies have a natural drive to mutate and adapt to the environment their egg was laid in. While leeches thrive in moist, warm environments... extremely cold or extremely dry environments face a real challenge for them!

Grabber claws: Are advanced, dexterous feelers. Leeches with this trait can easily maneuver through thick brush and vines, and as working animals they are great at multitasking.

Spines: Sometimes webbed to act as makeshift fins, they’re usually located on the leech’s back. They’re typically used for self defense and for intimidation, but since the leech can’t reach these spines random items may end up comically impaled on them.

Spikes: Some leeches have developed spikey skin to deter attackers. Spikes vary in length and can cover either parts or the entirety of the body.

Fur (Myth): A highly sought after trait, its nearly unheard of on wild leeches. Fur is hard to breed and pets/mounts with this trait sell for quite a bit on the market. The most sought out pet leeches after the Luxury class is the Angora breed, which are pedigree pets with luxurious fur.

Transparency (Myth): A genetic mutation in which a leech monster has such thin skin that its brain, teeth and internal organs are visible through it. While leeches with this trait are definitely cool to look at, they require extremely special care to be healthy!

Extra limbs:
With how unstable a leech’s genetic code may be, sprouting extra limbs is not that unexpected. Extra limbs is a blanket term for (Myth) rarity extra appendages.

Siren mutation: A common free mutation in which a leech develops without hind legs. These leeches are powerful swimmers, they manevour on the ground by slithering.

Extra tail(Myth): Up to 3 tails. These traits can stack if you have multiple upgrades.

Wings(Myth): 1 pair of wings that can be any variation (Insect wings, feathered wings, Bat wings etc.) (1 pair per upgrade)

Extra head(Myth): A mutation in which a leech grows a second head. The extra head may share the same consciousness as the original but it may just as well develop its own personality. This trait can be stacked with multiple upgrades.

Inorganic body: (Uncommon Mythical traits only)
Inorganic bodied leeches are a unique find. They're creatures that took survival to the extreme and their existence defies logic!

Slime body: The body consists of thick slime which drips and melts off as the leech moves. Leeches with this trait are able to digest pretty much anything and they can melt into a puddle as long as their organs remain intact within the puddle. With all that being said however, they dissolve in deep water.

Solid body: The body is hard like a rock; it cracks over time from the leech’s movement and is frequently infused with ore or other materials from the environment. These leeches can endure dry environments, but any deep wounds won’t heal well and it might just crumble apart.

Food body: The body/traits are made out of food items, but if anything unsuspecting takes a bite out of this leeches flesh it’ll be poisoned. Despite its appearance, it tastes as rank as leech flesh gets.  Food body leeches don’t do well in hot weather.

Glass bottle body:  The body is made out of thick glass or thick plastic. Its organs are replaced with piles of small items (ex: colorful sand, candy, gold coins, etc) so even if their organs fail they have many replacements. Other than being fragile, these leeches may be shattered by someone who wants the clearly visible treasure inside them.

Garden body: The body is covered by various plants. When a leech dies its body becomes highly potent fertilizer, but these leeches maintain a mutualistic relationship with the plants that grow on them; the leech provides nutrients for the plants, while the plants keep the leech alive beyond its years. That being said, a garden leech is only as healthy as the plants on its back.

Plush body:  The body is made of various arts and crafts materials, with the insides being made of cotton. Leeches with these traits won’t bleed out even from deep wounds, and can stitch themselves back together. These leech’s needs are completely opposite from the norm when it comes to moisture, the drier the better. 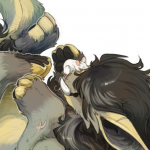 1 ・ 0
In Traits ・ By StudioMaz
No description provided.